Washington, DC, November 12, 2015-- Emeritus Chief Rabbi of UK delivered a talk upon the release of his book, “Not in God’s name, confronting religious violence” at the Brookings Institution.   I'll just highlight a few key points as the full conversation will be available at Brookings archives soon. 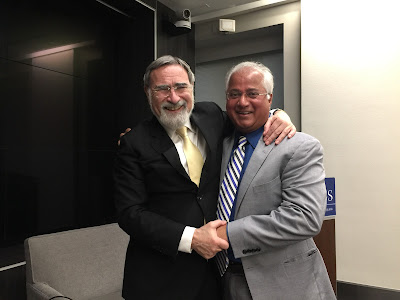 A meaningful Hug with the Rabbi 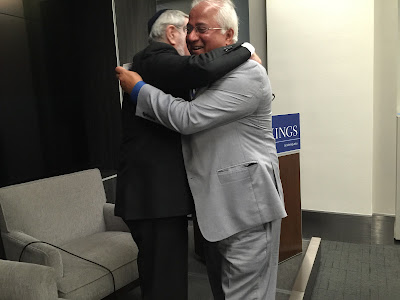 In the Q&A segment, I responded to Rabbi's typical question, where are the moderate Muslims and which he answered it himself; there is none.

I spoke up, Rabbi, I've some good news for you, there are 6 million moderate Muslims here in America, and I'm one of them. You came to the right place, welcome to America. May you be soaked in peace and drenched in peace, shalom.

Let's work together in creating cohesive societies rather than living in fear of each other? I'm here to answer any question about Islam and Muslims any one has.

The Rabbi welcomed my offer and wanted to give me a hug, and I said, I'll walk up-to you (I was in the very back of the room), but we decided to hug after the event.

I asked him, “Rabbi, since you correctly traced radicalism among Muslims to the year 1979, compounded by the fatwa on Rushdie, the first ever fatwa with universal application, I have to ask you this. Do you think all this mess with Iran could have been avoided, if we (the Americans) had asked Shah of Iran to step down in 1979, signaling to the people of Iran that we are with them and not their oppressor? Had that happened, the Iranians would not have become our enemies, right?

Indeed much of the mess was started with the Iranian revolution. He acknowledged the question and said we have to think about it. He did not have much to answer other than saying that he wants to look forward and not backwards.

I did not get to ask few more questions like; how reliable is the survey he quoted? That 83% of Palestinians want Israel wiped out? Was the same question asked of Israelis?

He said Israel is more isolated than ever before, anti-Semitism is on rise... I wanted to ask if there was any reflection on his part to see what Israeli policies have contributed towards such isolation. He also said that a majority of Muslims support suicide bombing which I disagree, he is given cooked up figures to justify Islamophobia. I am a Muslim in touch with thousands of Muslims around the world, and it is rare for any Muslim to support suicide bombing. The Quran forbids killing oneself or killing others, the loosy goosy ones do it because they are nuts. I don't buy their piss poor excuses and give them a break. I will say to them you SOB, you are the one who killed and I am going nail your tail for that.

There is a lot of research on the topic including my observations at www.IsraelPalestineDialogue.com 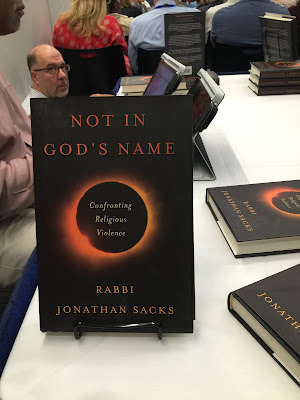 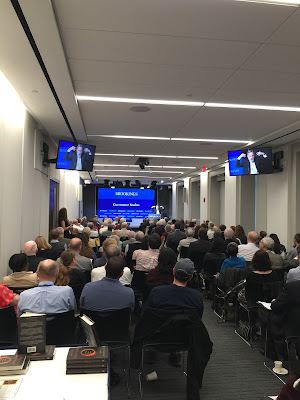 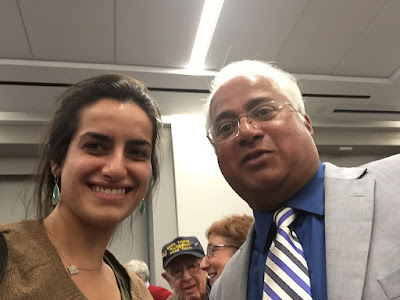 Well, the Q&A Session ended, and I started walking to the front. Amazing thing happened; I hope there is a video of it. As I walked, the people started opening up for me to walk thru – like Moses did when the Nile was split, and the conversation was passed on from the back to the front…. … Going for a hug? Rabbi’s hugger is going…. you remember the movie crocodile Dundee? You may recall how Kathleen Turner’s dialogues were passed on from group to group until it reached Dundee all the way to the train in the Subway?  Hell, yes, I enjoyed it.

Well, the Rabbi was ready for me for the hug! And we hugged each other and promised to work on mitigating Islamophobia, Anti-Semitism, Misogyny, racism, Xenophobia and homophobia – all evils of humanity that break the society apart.  Yes, we have a lot of work to do, and do, we will.

After that, I had some heart to heart conversation with a few Jewish friends, including meeting Mati Engel, director of National Initiatives of the Embassy of Israel, whom I will contact in the next few weeks.

An Orthodox Jewish Lady had good questions about the two solutions; my response was security for Israel hinges on justice for the Palestinians and vice versa. One will not happen without the other.

Another person asked me a million dollar question – Why can’t the Arab Lands absorb the Palestinians?  My response was instant – why should they? Don’t the Jewish people longed for a home? Shouldn’t the Palestinians long for their home? Home land is like a mother, people are emotionally bonded to her, you cannot extricate one from the other.   Besides, if Arab or anyone out there absorbs the forcibly evicted people from their homes, you will be legitimizing such evictions, as a civilized family of nations, we cannot do it. I am not in favor of it.

Palestinians and the Israelis can live on that land together; we have to build mechanisms for that – The Israeli and Palestinians have to see each others sufferings and empathise their apprehensions, as humans, they have to give full dignity to each other. It can be done and I hope to get to that some day. Indeed, the current Israeli President, Mr. Reuven Rivlin believes and supports the idea of Israel Palestine Confederation of which I am a Board Member.

More notes will be appended in a few days right here at: www.TheGhousediary.com and www.israelPalestineDialogue.com
Dr. Mike Ghouse is a community consultant, social scientist, thinker, writer and a speaker on Pluralism, Interfaith, Islam, politics, human rights, India, Israel-Palestine and foreign policy. He is committed to building cohesive societies and offers pluralistic solutions on issues of the day. More about him in 63 links at www.MikeGhouse.net and bulk of his writings are at TheGhousediary.com

Posted by Mike Ghouse at 8:54 PM No comments: