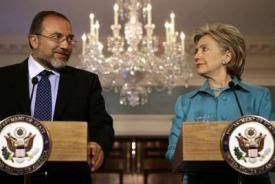 Men like Lieberman and Netanyahu on one side and Mashaal on the other are the real obstacles to peace in Middle East. They believe they can get away with their immense military power they have, but in the long run they are screwing the people of Israel with more insecurities and long term turmoil. No one will have peace if one keeps usurping the rights of the neighbors. The moderate majority of Israel, Jews and Palestinians need to wake up. - Mike Ghouse
#
Published on Thursday, June 18, 2009 by Haaretz (Israel)
Lieberman to Clinton: Israel Won't Freeze Settlements
by Haaretz (Israel)
Foreign Minister Avigdor Lieberman told U.S. Secretary of State Hillary Clinton on Wednesday that Israel could not accept the Obama administration's demand to "completely" halt activity in West Bank settlements.

U.S. Secretary of State Hillary Clinton (R) listens to Israel's Foreign Minister Avigdor Lieberman (L) as he speaks at a joint news conference following their meeting at the State Department in Washington June 17, 2009. (REUTERS/Yuri Gripas) "We have no intention to change the demographic balance in Judea and Samaria," Lieberman said during his talks with the secretary of state in Washington. "Everywhere people are born, people die, and we cannot accept a vision of stopping completely the settlements. We have to keep the natural growth."
Still, he said, Israel "ready for direct negotiations with the Palestinians."

Meanwhile, Clinton reiterated that the U.S. viewed a total settlement freeze as "important and essential" step toward achieving peace between Israel and the Palestinians.

She said that special Mideast envoy George Mitchell would look at a "number of critical concerns" regarding settlements.

"There are a number of critical concerns, many of which overlap in their impact and significance, that will be explored in the coming weeks as Senator Mitchell engages more deeply into the specifics as to where the Israelis and the Palestinians are willing to go together."

Clinton also said that Israeli leaders have in the past shifted their stance on the issue, and expected the current government to evolve in the same fashion.

Israel maintains that it reached understandings with the Bush administration on settlement construction that would allow for continued building within existing communities on the West Bank. The Obama administration rejects this position.

Meanwhile, Mitchell, who met with Palestinian President Mahmoud Abbas in Ramallah on Wednesday, said that the U.S. seeks a "prompt resumption" of peace negotiations, and predicted preparations for the process could conclude within a matter of weeks.

Western and Israeli officials said this week that while the United States wants Israel to impose a moratorium on new tenders for building in settlements, it was nevertheless considering allowances that could permit some projects already under way to proceed.

U.S. President Barack Obama's blunt and public call for Israel to halt all settlement activity in the West Bank has opened a rare rift between the close allies. But both sides say they are eager to work out their differences.

Prime Minister Benjamin Netanyahu will meet Mitchell in Europe next week to try to hammer out an agreement, Israeli officials said.

"That's our goal but we're not there yet," a senior Israeli official said.

Mitchell has said a key element has been trying to pin down exactly what Israel means by the "natural growth" of settlements that Netanyahu has said he will defend. In principle, Netanyahu says he wants growing families to be able to accommodate their children in the towns that Israelis have built.

While firm in demanding a ban on new tenders as part of an overall settlement freeze, Western and Israeli officials said the Obama administration was assessing in which cases continued building could be permitted.

The officials, speaking on condition of anonymity, said allowances for continued building could be made if, for example, a project in a settlement was nearing completion or for cases in which money has been invested in a project and cannot be reimbursed.

"There's room for some flexibility in defining what's acceptable in terms of a settlement freeze. Where do you draw the line?" the official said of deliberations within the Obama administration.

The officials said the Obama administration has yet to agree to any exceptions, and stressed that Washington's stated goal of a total freeze in settlement activity, including building in existing blocs to accommodate growing settler families, known as "natural growth", would not change.

Mitchell said in Washington on Tuesday of his meetings with Israeli and other officials: "There are almost as many definitions (of natural growth) as there are people speaking."

He added: "Different people have different interpretations of different phrases ... and we're trying to reach an agreement and understanding that helps us move the process forward."

Netanyahu has asserted that his government does not have the legal authority to stop building in cases in which tenders for new structures have already been awarded or when homes under construction have already been purchased.

Palestinian negotiator Saeb Erekat rejected any loopholes that would allow any building.

Yariv Oppenheimer of the anti-settlement watchdog group Peace Now said Israel was likely to use any U.S. flexibility to ramp up building in the West Bank.

"In the past, every time there was an understanding, the outcome was Israel doubled the number of settlers in the West Bank," he said.

Some half a million Jews live among nearly three million Palestinians in the West Bank and East Jerusalem, territories which were captured from Jordan in the 1967 Six Day War.