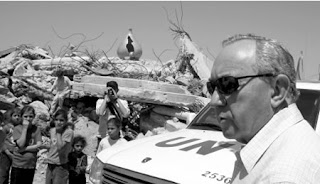 It is time for the majority of Israelis and Jews around the world to speak up. Their silence is signalling the evil men to continue to hurt the future of the Jewish people.

Shame on the congressmen and women and the Senators of the United States, don't they have the GD guts to speak their conscience, if they have one? Our arrogance has no limits, the world votes one way and we the other.

In the long haul, the biggest enemies of Israel are these greedy men and women who are letting Hawks of Israel get away from murders and massacres and compromise peace and security of Israel and the Palestine for a long time to come. Justice is the only thing that is sustainable, the short term (in terms of Jewish history) gains for bullying the congressmen and women and getting the US to veto the UN Security resolutions is going to hurt the Israelis common people. The idiots have been doing this for 60 years, it is time to wake up and speak up if not evil persists the Neocons.

The Obama administration and the Democratic leadership in Congress appear to be continuing the Bush administration policy of ignoring and denouncing those who have the temerity to report violations of international humanitarian law by the United States or its allies. The latest example can be seen in their reaction to the United Nations Human Rights Council's fact-finding mission on the Gaza conflict, which was headed by the renowned South African jurist Richard Goldstone.

Goldstone, who has had a longstanding reputation for fairness and objectivity and who previously led the war crimes prosecutions for Yugoslavia and Rwanda, is a Zionist Jew and a longtime supporter of Israel. He rejected the original mandate of the UN Human Rights Council that the investigation focus solely upon violations of human rights by Israel and successfully demanded that the investigation be expanded to examine the conduct by both sides of the conflict.

The Goldstone Commission report cited a number of violations of the laws of war by Hamas, including its rocket attacks on Israel, its torture of Palestinian opponents, and its continued holding of kidnapped Israeli solider Gilad Shalit. The report's criticism of Hamas would have likely been even longer and harsher had the Israeli government agreed to meet with the commission and allow its members to visit Israel.

Rather than challenge the content of the meticulously documented 575-page report, U.S. ambassador to the United Nations Susan Rice responded to its release by noting that the United States had long had "very serious concerns" about the mandate the Human Rights Council gave to Goldstone, calling it "unbalanced, one-sided, and basically unacceptable," ignoring that the original mandate was superseded long ago by a balanced directive. Rice was particularly critical of the report's recommendation that those Palestinians and Israelis suspected of war crimes be tried before the International Criminal Court, arguing, "Our view is that we need to be focused on the future." Though Rice had argued just a few months earlier during a UN debate on Darfur that war crimes charges should never be sacrificed for political reasons, she reinforced Assistant Secretary of State Phillip Crowley's insistence that the Goldstone Commission report "should not be used as a mechanism to add impediments to getting back to the peace process."

In late September, Michael Posner, the new U.S. assistant secretary of state for human rights, noted, "We disagree sharply with many of the report's assessments and its recommendations, and believe it to be deeply flawed."

Sixteen Democrats joined fourteen Republicans in writing a letter to Secretary of State Hillary Clinton attacking what they called a "biased report." The letter insisted that Israeli human rights abuses must not be taken up in international fora but—despite the Israeli government's long history of covering up war crimes by its armed forces—the Israeli government must be trusted to handle the matter internally. The signatories praised what they called "the extraordinary measures taken by the Israel Defense Forces to minimize civilian casualties," praised the State Department for publicly raising its significant concerns about the report, and called upon the Obama administration to "denounce the unbalanced nature of this investigation." The letter was signed by such leading Democratic senators as Charles Schumer (D-NY), Carl Levin (D-MI), Barbara Boxer (D-CA), Barbara Mikulski (D-MD), Ron Wyden (D-OR), Russ Feingold (D-WI), and Daniel Inouye (D-HI).

In short, while Goldstone recognizes that "the ongoing lack of justice is undermining any hope for a successful peace process and reinforcing an environment that fosters violence," the Obama administration's view is that holding human rights abusers accountable for their actions is somehow incompatible with working for peace.

Meanwhile on Capitol Hill, Democrats were echoing their Republican counterparts in denouncing Goldstone and his commission's report. Rep. Elliot Engel of New York and Rep. Shelley Berkley of Nevada, senior Democratic members of the House Middle East subcommittee, issued a joint statement claiming the Goldstone Commission report was "biased against Israel." Ignoring the detailed evidence to the contrary, they insisted that "Israel took every reasonable step to avoid civilian casualties" and that "it is ridiculous to claim that Israel did not take appropriate actions to protect civilian populations." Even though the UN report—like those of Amnesty International and others—challenged the myth that Hamas fighters had used Palestinian civilians as human shields, Engel and Berkley still insisted that the report ignored "the true root of this problem -- Hamas terrorists who ... are willing to risk their own civilian populations -- even their own children."

The real fantasyland, then, appears to be among congressional Democratic leaders and members of the Obama administration who are willing to ignore empirical evidence if it reflects unfavorably against Israel or other U.S. allies.

The problem is not one of being too "pro-Israel," since it is just such war crimes and other gross and systematic human rights abuses by the Israeli government that have resulted in the rise of extremist groups such as Hamas and Hezbollah in the first place. The problem is that the Democratic leaders in Washington, like their Republican predecessors, recognize that popular concern for human rights can be an impediment to their militaristic agenda in the Middle East. As a result, they have joined the Republicans in a campaign to, in effect, kill the messenger: attack the United Nations, Amnesty International, or anyone else—journalist, scholar, activist, or one of the world's most respected jurists -- who puts forward credible evidence of human rights abuses by the United States or its allies.

Stephen Zunes (www.stephenzunes.org) is a professor of politics and chair of Middle Eastern studies at the University of San Francisco, a senior policy analyst for Foreign Policy in Focus, and a longtime contributing editor at Tikkun.
Posted by Mike Ghouse at 9:04 PM