Today, I was with Sean Hannity and Reza Kahlili (former member of Iranian national guard and under cover CIA operative) today. I was clear - War is not the option, it will screw the Average American more than any one else, and will destroy America besides guaranteeing insecurity for Israel for centuries to come.

On my part, I will do whatever it takes to protest bloody war. The screwed up heads Netanyahu, Obama/Romney and loose mouth Ahmedinejad will be fine - its the average Iranian, Israeli and American that will be screwed.

Has there been a time when CIA and Mossad intelligence was right?
They have been wrong all the times and so is this time.

I am against war, especially the ones based on falsities, and will do every thing I can to protest it. 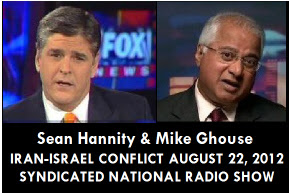 Should we trust Ahmedinejad? Netanyahu?
Nopes!

Both are faking to protect their nations, but will ruin it unless people dump them.

“We have to reach the point where the country’s defense capabilities stop all the tyrants and hegemony and even make them back down.”