The following video comes from Jewish Voice for Peace, which has a similar call as mine - Security for Jews and Justice for the Palestinians. The site claims, "Watch this short, historically accurate animated introduction to Israel-Palestine 101" -

I believe Miko Peled's history has a slight variation in its narration of history, the Palestinians did not accept the mandate because a majority of the living population were given a small piece of land, where as the majority of the land was given to the a minority Jews.  However, between Miko Peled's history and this, varies on the Arab invasion.

Indeed, my understanding of the entire conflict is laid out in my article, http://israel-palestine-dialogue.blogspot.com/2012/11/how-to-achieve-security-for-israel-and.html

Here is the version by Jewish voice for peace. 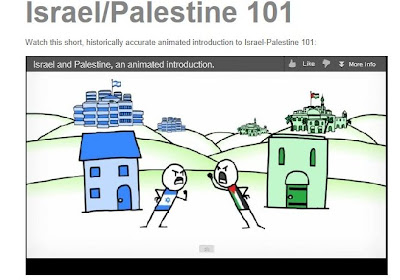 ----------
Mike Ghouse is a speaker, thinker and a writer on pluralism, politics, peace, Islam, Israel, India, interfaith, and cohesion at work place and standing up for others as an activist. He is committed to building a Cohesive America and offers pluralistic solutions on issues of the day at www.TheGhousediary.com. Mike has a presence on national and local TV, Radio and Print Media. He is a frequent guest on Sean Hannity show on Fox TV, and a commentator on national radio networks, he contributes weekly to the Texas Faith Column at Dallas Morning News, fortnightly at Huffington post, and several other periodicals across the world. His personal site www.MikeGhouse.net indexes everything you want to know about him.