Empathizing with Gaza Does NOT Make Me Anti-Semitic, Nor Pro-Hamas or Anti-Israel. It Makes Me human.


On the ground in Gaza, Israel’s war against Hamas has been devastating. Online and in the public sphere, a different sort of war has been taking place – a broad initiative to delegitimize those who raise questions about and critique Israel’s actions.
This initiative is being carried out both by so-called ‘pro-Israel’ individuals as well as student volunteers enlisted by Israel’s government in its ‘social media war.’ The result: those who merely express empathy for the suffering in Gaza, where over 800 people have been killed and 5,000 injured, are tainted as anti-Semitic or pro-Hamas, and those who offer dissenting opinions are labelled as enemies who seek Israel’s destruction.
The goal is to shut down dialogue and debate, something Jon Stewart nailed in a recent bit in which he attempts to discuss Israel, only to be shouted down as a self-hating Jew. It is not a new phenomenon or initiative, though it has become much more intense and widespread as emotions run high over the ongoing violence in Gaza and continued rocket attacks in Israel.
It seems to be affecting everyone who publicly offers critical opinions about Israel’s Gaza offensive, whether celebrities,journalists or anonymous individuals. 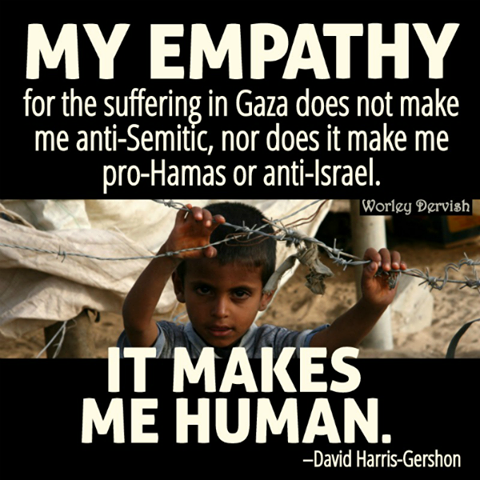 The horrible irony is that, as propagandists try to defame dissenters by slandering them as anti-Semitic, thus diluting its meaning, real anti-Semitism is rearing its head in Europe. Anti-semitism is still a real danger, and that danger is being made graver by those who are participating in this online initiative to falsely tar concerned voices as enemies of Israel.

Anti-Israel. It Makes Me human.

John Lennon's "Imagine," Made Into A Comic Strip

Empathizing with Gaza Does NOT Make Me Anti-Semitic, Nor Pro-Hamas or Anti-Israel. It Makes Me human.

8 Reasons Young Americans Don't Fight Back: How the US Crushed Youth Resistance