The moderate Jews need to speak up for the sake of Jewish and Palestinian Children, it's time to shelve the hatred for each other and working on living a life.

As an American, I will do everything I can to make my government represent the Americans, which it has not.

Israeli forces on Monday killed 60 Palestinian protesters in Gaza during a demonstration that followed weeks of protests.

Israel and the U.S. have criticized the 47-state Human Rights Council, accusing it of anti-Israeli bias. 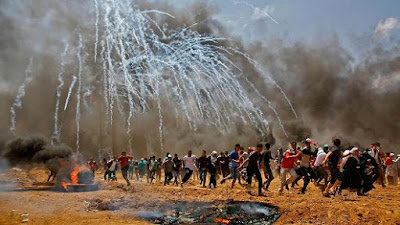 "They are, in essence, caged in a toxic slum from birth to death," Zeid Ra'ad al-Hussein, the UN's High Commissioner for Human Rights, said of the Palestinians living in Gaza during a special session of the UN's Human Rights Council, convened in the wake of Monday's deadly violence on the Israeli-Gaza border.

"Nobody has been made safer by the horrific events of the past week," Hussein said. "End the occupation, and the violence and insecurity will largely disappear."

Israeli Defense Forces (IDF) killed 60 Palestinian protesters in Gaza during a demonstration that followed weeks of protests marking the 1948 establishment of the Israeli state. It also coincided with the opening of the U.S. embassy in Jerusalem.

Israel defended its actions, saying it had acted in self-defense and blamed the bloodshed on Hamas, the Islamist militant and political group that governs the Gaza Strip.

Israel's UN ambassador Aviva Raz Shechter called Zeid's words "politically motivated," adding that "the loss of life could have been avoided had Hamas refrained from sending terrorists to attack Israel under the cover of the riots, while exploiting its own civilian population as human shields."
'Toxic slum'
With the words "toxic slum," Hussein was likely referring to the living conditions in the blockaded territory of Gaza, where 1.9 million residents live in an enclave of 225 square miles, making it one of the most densely-populated places on earth. Both Israel and Egypt imposed air, land and sea blockades on the territory in 2007 after Hamas won local elections in 2006.

Thirty-nine percent of the population lives below the poverty line, more than half lack access to reliable electricity, and unemployment stands at 42 percent, according to the UN. The World Bank in March said that Gaza's residents have "for years… endured an environmental disaster due to sewage pollution." Ninety-seven percent of Gaza's drinking water is contaminated by sewage. 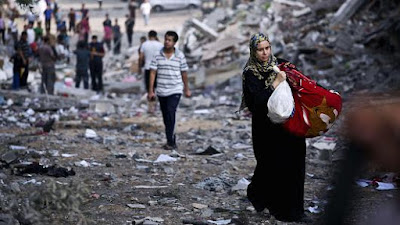 Hussein described Gazans as "deprived of dignity, dehumanized by the Israeli authorities to such a point it appears officials do not even consider that these men and women have a right, as well as every reason, to protest."

Roberto Schmidt | AFP | Getty Images
A Palestinian woman takes some of her belongings from her partially destroyed home across the street from where a high rise apartment building in Gaza City was targeted by Israeli airstrikes, Aug. 26, 2014.
Although Israeli troops left Gaza in 2005, Israel still retains control of Gaza's airspace and coastline, leading the UN to designate it as an occupying power there.

Israel and the U.S. have criticized the 47-state Human Rights Council, whose members are chosen by the UN General Assembly, claiming it is biased and has a disproportionate number of member countries hostile to Israel.

Decades of turmoil
Monday's violence was met with condemnation from international leaders, who urged the protection of rights to peaceful protest. But Tel Aviv affirmed its position as absolutely necessary to protect its citizens from attacks.

"The Hamas terrorist organization declares it intends to destroy Israel and sends thousands to breach the border fence in order to achieve this goal," Netanyahu had written on Twitter after the events. "We will continue to act with determination to protect our sovereignty and citizens."
Hamas is designated a terrorist group by the U.S., and has killed hundreds of Israelis in attacks since the 1990s.

The White House echoed Netanyahu's defense, emphasizing the right of Israel to defend its border and calling the deaths "unfortunate propaganda" on the part of Hamas. Hamas denied provoking the violence, while a Hamas official told local press that 50 of the demonstrators killed were members of the group.

Mohammed Abed | AFP | Getty Images
Palestinians run for cover from tear gas during clashes with Israeli security forces near the border between Israel and the Gaza Strip, east of Jabalia on May 14, 2018, as Palestinians protest over the inauguration of the US embassy following its controversial move to Jerusalem.
More than 2,400 people were reported injured Monday in addition to the dead. At least eight children under the age of 16 were killed, according to Palestine's envoy to the UN. The UN subsequently called for an independent probe into the event, which the U.S. so far has blocked.

The UN classifies Israel as an occupier state over the Palestinian territories, whose occupations following the 1967 Six-Day War are still considered in violation of international law. More than 1.5 million Palestinians live in refugee camps across the Middle East today. 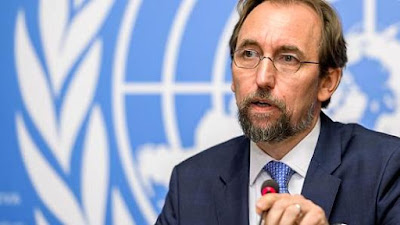 Demonstrations have gone on for several weeks to mark the 70th anniversary of the 1948 "Nakba," as many in the Arab world call the time period that saw Israel establish itself as a state. Some 700,000 Palestinians fled or were forced from their homes, and have since not been granted the right to return.