Trump made a bad mistake on Iran

Netanyahu has cooked up falsities once again, and the Israelis, Americans, Iranians and the world will be paying for it. What a shame it is, the Jewish people have lived through insecurities for ages, and Netanyahu has no desire to bring an end to it but aggravates it. He wants to be Prime Minister for life at any cost, and one guaranteed way is to keep Israeli Citizens in constant fear and on the edge.  I am willing to say, he really does not give a flip about Jews, Judaism or Israel or human rights, it is all about him. 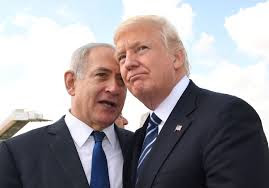 Six Nations, the most powerful ones, made a treaty with Iran to hold off on to the nuclear development. Netanyahu sees an opportunity to mess it up and keep his grip on the nation of Israel.  He cooks up facts while his own generals don’t believe him. I hope he has not influenced Trump through Cohen.

The breaking of this deal is like slapping the whole world, and guess what happens – it wrongfully breeds resentment towards Israel instead of Netanyahu. That ill-will shamefully sounds like Anti-Semitism. The Israeli Citizens have a choice, like we the Americans do, to make sure it is the government of the people by the people for the people. I don’t believe the majority of Israelis support Netanyahu’s policy, he gets by with coalitions.

Anti-Semitism is Augmented by Netanyahu and Trump
https://www.huffingtonpost.com/entry/anti-semitism-is-augmented-by-netanyahu-and-trump-jerusalem_us_5a2a6ea9e4b0d7c3f26221b6

Can the world blame Americans for America’s president breaking contracts? Are we responsible? Is this the government of People?

If you resent this note, I urge you to read it again; my intention is to bring sense to the chaos created by disgustingly selfish leaders. Leaders should be elected based on peace and prosperity they plan to bring. The end result should for each one of the Israeli citizens to drop their guards and live without fear.  My slogan is Security to Israelis and Justice to the Palestinians, one will not happen without the other.

The author is the president of the Center for Pluralism in Washington, DC. He is committed to building cohesive societies and offers pluralistic solutions on issues of the day.
Posted by Mike Ghouse at 6:38 AM